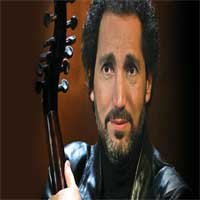 Nassir Shamma is a renowned Arab Iraqi musician and oud player. He was born in 1963 in Kut, a village on the Tigris River. He began studying the oud at the age of 12 in Baghdad, following in the footsteps of Jamil and Munir Bashir. When he was 11-years old, Shamma saw an oud for the first time, in the hands of a stylish music teacher. Although Shamma's father, a shop owner, was religiously conservative, he did not object to his son's artistic ambitions. In 1985, Shamma played his own compositions at his first concert, attended by several renowned Iraqi artists. At the time, he worked closely with the late Iraqi master Munir Bashir. But Shamma wanted to blaze his own path. Master Munir invented the technique of contemplation with oud, but Shamma wanted his music to carry content, ideas or images that are both traditionally shocking yet profound. He received his diploma from the Baghdad Academy of Music in 1987. He began to teach oud after three years at the academy, as well as continuing his own studies. Shamma has composed music for films, plays and television.

Between 1993 and 1998 he taught the oud at the Higher Institute of Music in Tunisia, and in 1999 he took the post of Director of The Arab House of Oud in Cairo. He performs on the oud in a manner which combines traditional methods with his own modern compositions. Naseer Shamma has also created an eight-string oud or lute following the manuscript of the 9th-century music theorist Al-Farabi. This new design (eight instead of six strings) expanded the musical range of the oud and gave it a distinct tonality. His innovations also include a new method of playing the oud with only one hand, which was originally invented by Salim Abdulkarim, so that children and soldiers injured during the Gulf War could play and enjoy the oud.