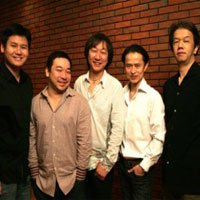 Unit Asia is a multinational group consisting of five Asian musicians from Japan, Thailana and Malaysia. With their mutual trust, warm personalities and exceptional abilities, they will jointly create an outstanding musical sensation. Their motive power; their passion toward Unit Asia, combined with their versatile sensitivities and ideas from diverse musical backgrounds such as rock, pop and folk/traditional music are incorporated into the members' original tunes. Under Isao Miyoshi's leadership they create unique jazz music that transcends limitations such as nations, cultures and musical genres. Their performances always touch the hearts of the audiences with a range of warm emotions and impressions.

Isao "Sankichi" Miyoshi (Guitar) Japan
Isao Miyoshi, one of the leading Japanese jazz guitarists, made his debut with his own band in 1983, and in 1992 he formed a guitar trio. His first album "Sankichizm" released in 1995 won the highest praise. Later, he released various albums including "Your Smile" (1998), recorded with Toots Thielemans and "First Touch" (2006), and acoustic duo album. Miyoshi participated in many overseas performances and he is active in many genres, including pop. In Unit Asia, Miyoshi displays his skills and diversity; leading this group with his warm and broad-minded personality.

Koh Mr.Saxman (Saxophone) Thailand
After becoming a professional musician in his teens, Koh joined the contemporary band, "Boy Thai" as a founding member. He also joined many other leading bands, and became one of the most sought-after studio musicians. His first solo album "Mr.Saxman" (2002) included chart topping tracks in a number of musical styles. He performed in many countries and he also devotes his time to educating a new generation of saxophonists in a number of school inlcluding his own; "Sax Society". With his powerful emotions and performance ability, Koh leads the strong front-line of this unit with Isao Miyoshi.

Hiroyuki Noritake (Drums) Japan
Hiroyuki Noritake began his professional career in 1985 by joining the renowned Japanese fusion group "The Square". They won the Japan Gold Disc Award ten times. In 1999, he released his first solo album "Dreams Can Go". which displayed his ability as a composer. Since leaveing "The Square" in 2000 he has performed with different artists in a variety of genres including J-Pop, and he gave highly acclaimed performances with several orchestras such as the Orchestre Lamourex. In 2004, fe formed the twin drum group "Synchronized DNA" with Akira Jimbo. In Unit Asia, Noritake displays his versatile and well-honed performance ability, and his groovy drumming breathes life into this group.

Tay Cher Siang (Piano) Malaysia
Tay Cher Siang received his Masters Degree in music from West Virginia University. He won many awards including the HERF Top-Off Award and the Valerie Canady Award. He is active with both big bands and small groups; directing, arranging, performing as a classical and jazz pianist, and he is also a composer. Tay also performed regularly as a soloist. Recently, he has been active in the Kuala Lumpur jazz scene, teaching at universities, performing with the Greg Lyons group amond others, and backing up prominent vocalists. Displaying his ability as a composer as well as a pianist, his sensitive and dynamic play fills this group's music with rich color.

Shigeki Ippon (Bass) Japan
Shigeki Ippon studied the contrabass at the Tokyo National University of Fine Arts and Music. In 2002, he launched his performance career as a professional musician, performing in concerts with various artists such as Kiyohiko Semba (percussion). He has participated in numerous recording sessions for J-Pop artists, CM, TV and soundtracks. An expert at playing both contrabass and electric bass in various genres including classical music, jazz and pop, with his unique interpretations, Shigeki Ippon is a remarkable young artist. As a pivotal memeber of this group, Ippon creates groovy rhythm combinations with Hiroyuki Noritake.