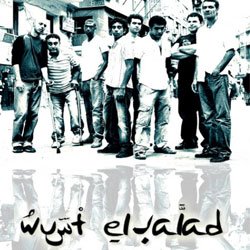 Wust El Balad is an Egyptian Soft rock band, founded in Cairo in 1999 by 2 of its current members, Ahmed Omran and Hany Adel. Currently the band consists of 8 members.

The band is considered to be the most successful rock act in Egypt, and the whole Arab world, as it’s the first band in the region to gain such a huge success and acclaim such a large following. The band has finally released its debut album under the Egyptian label Star Gate Records, in 2007.

Later after Omran and Adel formed the band, 6 more members joined, each with his own musical background, blending it all together. Their first appearance as Wust El Balad was at Al Mashrabeya Gallery, followed by their first paid performance at the Berlitz Language Center.  Ever since that moment, Wust El Balad was a regular performer at all galleries, cultural centers, bars, special events and hotels, and even abroad. Their music blends the Egyptian traditional style with the modern musical touch. They mix music played with purely oriental instruments, such as Oud, with western styles of music, such as those played with “guitar” and “piano.”

Their vision then was to reach the average person that can’t afford to hear them in bars or galleries, and so they were the first band to play in the Egyptian street, experiencing one of the most amazing concerts, playing in Al Alfi Street to the local community during the French festival “Les Français aiment l’Egypte.”